Lindsay Lohan was spotted having the embarrassing wardrobe malfunction at MTV Movie Awards. 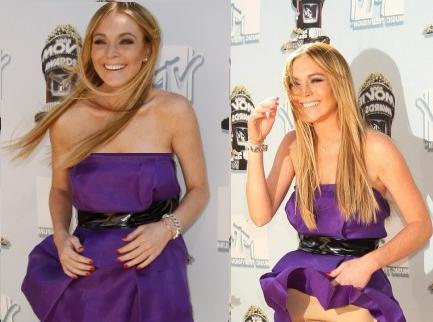 The “Freaky Friday” actress flashes her underwear, which you could see here, after being caught off guard by a gust of wind at the MTV Movie Awards in Los Angeles last night. She led the Young Hollywood charge on the red carpet.

Johnny Depp, who emerged as the only multiple winner, first took the stage to accept the best comedic performance award for his turn as pirate Jack Sparrow in Pirates of the Caribbean: At World’s End. He also took the second award as a best villain for Sweeney Todd, saying, “You can ask anybody, I’m not a very funny person.”

The 17th annual MTV Movie Awards, a fan-driven event with none of the stuffiness or significance of the Oscars, took place in a hilltop theater that overlooked the smoky remains of well-known movie sets and a King Kong attraction.

Transformers won the top award, best movie, and director Michael Bay said he would start shooting a sequel to the hit action movie on Monday.