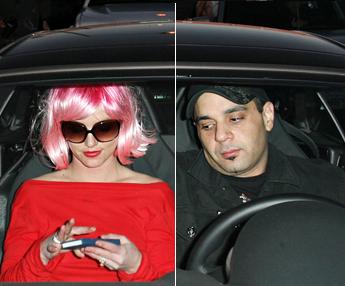 In a declaration filed by Lynne Spears, Sam Lufti is accused of cutting off Britney’s phone service, lying about medication and hiding Britney’s dog.

Lynne is making these shocking allegations in hopes of keeping Sam Lufti far from Britney Spears, who has been under observation at the psychiatric ward at UCLA Medical Center since Jan. 31.

In court documents filed Feb. 1 in L.A., Lynne asks that a temporary restraining order be placed on Sam, whom Britney has known since October 2007 and who has served as Britney’s manager. In the order, Lynne states, “Mr. Lutfi has essentially moved into Britney’s home and has purported to take control of her life, home and finances.”

Lynne also explained that Sam Lufti “cut Britney’s home phone line and removed her cell phone chargers. He yells at her. He claims to control everything.”

According to Lynne, “Sam had told Britney that she was an unfit mother, a piece of trash and a wh*re, that she cares more about Adnan, her current boyfriend, than she cares about her kids, and that she does not deserve the kids.”

And the worst part of the shocking revelation is, “Sam told [my friend] Jackie and me that he grinds up Britney’s pills, which were on the counter and included Risperdal and Seroquel. He told us that the doctor who is treating her now is trying to get her into a sleep-induced coma so that they could then give her drugs to heal her brain.”

As tensions between Sam Lufti and the family escalated during an intervention, he allegedly said, “If you try to get rid of me, she’ll be dead and I’ll p*ss on her grave.”