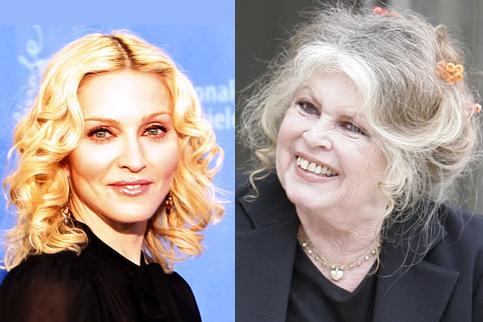 Madonna has made her dislike for Sarah Palin very clear by banning the politician from attending her world tour.

The French film legend-turned-activist Brigitte Bardot, who has been fending off charges of racism and bigotry for her past anti-Muslim comments also had some words for Sarah Palin on Tuesday, saying the US vice presidential candidate was “a disgrace” to women.

Brigitte Bardot wrote in an open letter to Republican John McCain’s running mate in the November vote: “I hope you lose these elections because that would be a victory for the world. By denying the responsibility of man in global warming, by advocating gun rights and making statements that are disconcertingly stupid, you are a disgrace to women and you alone represent a terrible threat, a true environmental catastrophe.”

The actress took animal rights seriously as she currently headed an animal rights foundation. She blasted Palin for her pro-Arctic oil exploration stance that could endanger animal habitats and for dismissing measures to protect polar bears.

She also wrote: “This shows your total lack of responsibility, your inability to protect or simply respect animal life.”

Brigitte Bardot finished her screed against Sarah Palin by asking her to refrain from comparing herself to a tenacious breed of dog: “I know them well and I can assure you that no pitbull, no dog, nor any other animal for that matter is as dangerous as you are.”