It turns out Brad Pitt really is a no-holds-barred fighter – as a member of the Australian Olympic boxing team. 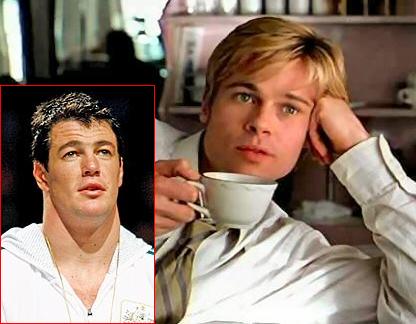 The Aussie Pitt, 25, quit his day job as a painter to train as a heavyweight boxer for the 2008 Games. And while he still gets the occasional taunt about his name, he’s learned to put up with it.

The 25-year-old athlete revealed: “Mate, I’ve been living with that other bloke’s name for years, it doesn’t worry me at all.”

His mother said he found out about his more famous counterpart during elementary school, when a child brought in a newspaper clip about the actor during show and tell.

His mother Leanne revealed: “He likes to be known for his talent, not his name.”

Talent he has. Ranked 33rd in the World Championships in Chicago in 2007, he’s gearing up for a medal run in Beijing after a grueling training session in Thailand to acclimate himself to Chinese conditions, and is ready to make a name for himself – his own name.

He added: “I’ve always been Brad. Let him change his name.”