The final act of Michael Jackson’s life came into clearer focus Friday, a picture of a fallen superstar working out with TV’s “Incredible Hulk” and under the care of his own private cardiologist as he tried to get his 50-year-old body in shape for a grueling bid to reclaim his glory. 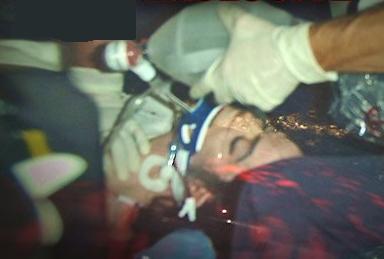 While the exact circumstances of his death remained unclear, early clues suggested he may simply have pushed his heart too far.

Police said they had towed the doctor’s BMW from Jackson’s home because it may include medication or other evidence, and a source familiar with the situation told The Associated Press that a heart attack appeared to have caused the cardiac arrest that led to the pop icon’s sudden death.

As grief for the King of Pop poured out from the icons of music to heartbroken fans, and the world came to grips with losing one of the most luminous celebrities of all time, an autopsy showed no sign of trauma or foul play to Jackson, who died Thursday at UCLA Medical Center after paramedics not could not revive him.

The AP source who said Jackson apparently suffered a heart attack was not authorized to speak publicly and requested anonymity. Jackson’s brother Jermaine had said the pop singer apparently went into cardiac arrest _ which often, but not always, happens because of a heart attack.

Authorities said they spoke with the doctor briefly Thursday and Friday and expected to meet with him again soon. Police stressed that the doctor, identified by the Los Angeles Times as cardiologist Conrad Murray, was not a criminal suspect.

“We do not consider him to be uncooperative at this time,” Beck said. “We think that he will assist us in coming to the truth of the facts in this case.”

Craig Harvey, a spokesman for the Los Angeles County coroner, said there were no signs of foul play in the autopsy and further tests would be needed to determine cause of death. He said Jackson was taking some unspecified prescription medication but gave few other details.

Meanwhile, a 911 call released by fire officials shed light on the desperate effort at the mansion to save Jackson’s life before paramedics arrived Thursday afternoon. Jackson died later at UCLA Medical Center.

In the recording, an unidentified caller pleads with authorities to send help, offering no clues about why Jackson was stricken. He tells a dispatcher that Jackson’s doctor is performing CPR.

“He’s pumping his chest,” the caller says, “but he’s not responding to anything.”

Asked by the dispatcher whether anyone saw what happened, the caller answers: “No, just the doctor, sir. The doctor has been the only one there.”

Phillips quoted Jackson as saying: “Look, this whole business revolves around me. I’m a machine, and we have to keep the machine well-oiled.” Phillips said Jackson submitted to at least five hours of physicals that insurers had insisted on.

On Friday, the autopsy was completed in a matter of hours, but an official cause of death could take up to six weeks while medical examiners await toxicology tests. No funeral plans had been made public.

Jackson had remained out of the public spotlight during intense rehearsals for the London concerts, but those with access said he was upbeat and seemingly energized by his planned comeback. Ken Ehrlich, executive producer of the Grammys, said he watched Jackson dance energetically as recently as Wednesday.

“There was this one moment, he was moving across the stage and he was doing these trademark Michael moves, and I know I got this big grin on my face, and I started thinking to myself, ‘You know, it’s been years since I’ve seen that,'” he said.

Lou Ferrigno, the star of “The Incredible Hulk,” said he had been working out with Jackson for the past several months.

Still, Jackson’s health had been known to be precarious in recent years, and one family friend said Friday that he had warned the entertainer’s family about his use of painkillers.

“I said one day we’re going to have this experience. And when Anna Nicole Smith passed away, I said we cannot have this kind of thing with Michael Jackson,” Brian Oxman, a former Jackson attorney and family friend, told NBC’s “Today” show. “The result was I warned everyone, and lo and behold, here we are. I don’t know what caused his death. But I feared this day, and here we are.”

Oxman claimed Jackson had prescription drugs at his disposal to help with pain suffered when he broke his leg after he fell off a stage and for broken vertebrae in his back.

The worldwide wave of mourning for Jackson continued unabated for the man who revolutionized pop music and moonwalked his way into entertainment legend.

“My heart, my mind are broken,” said Elizabeth Taylor, who was one of Jackson’s closest friends and married one of her husbands at a lavish wedding at the pop star’s Neverland Ranch in 1991. She said she had heard the news as she was preparing to travel to London for Jackson’s comeback show, and added, “I can’t imagine life without him.”

Hundreds made a pilgrimage to the Jackson family’s compound in Los Angeles, leaving flowers and messages of love. They did the same at his star on the Hollywood Walk of Fame and at the home in Los Angeles’ Holmby Hills where Jackson was stricken. Some camped out overnight.

In New York, people stopped at Harlem’s Apollo Theater, where Jackson had performed as a child with his brothers in one of rock’s first bubblegum supergroups, the Jackson 5.

Scores of celebrities who knew or worked with Jackson _ or were simply awed by him _ issued statements of mourning. Some came through publicists and others through emotional postings on social networking sites like Twitter and Facebook, where countless everyday fans were sharing memories as well.

And Diana Ross, the former lead singer of the Supremes who introduced the Jackson 5 at their debut on “The Ed Sullivan Show” in 1969, said she could not stop crying. “I am unable to imagine this,” she said. “My heart is hurting.”

His two ex-wives both said they were devastated. One of them, Lisa Marie Presley, posted a long, emotional statement on her MySpace page in which she said her ex-husband had confided to her 14 years ago that he feared dying young and under tragic circumstances, just as her father, Elvis Presley, had.

“I promptly tried to deter him from the idea, at which point he just shrugged his shoulders and nodded almost matter of fact as if to let me know, he knew what he knew and that was kind of that,” Presley said.

At rehearsals for Sunday’s Black Entertainment Awards show, stars like Beyonce, Wyclef Jean and Ne-Yo were frantically revamping their performances in an effort to turn the evening into a Michael Jackson tribute.

When he was on trial on child molestation charges in 2005, Jackson appeared gaunt and had recurring back problems that he attributed to stress. His trial was interrupted several times by hospital visits, and Jackson once even appeared late to court dressed in his pajamas after an emergency room visit.

After his acquittal, Jackson’s prosecutor argued against returning some items that had been seized from Neverland, the Santa Barbara County estate Jackson had converted into a children’s playland. Among the items were syringes, the powerful painkiller Demerol and other prescription drugs.

Demerol carries a long list of warnings to users. The government warns that mixing it with certain other drugs can lead to reactions including slowed or stopped breathing, shock and cardiac arrest.

Within hours of Jackson’s death on Thursday, fans were inundating Web sites that sell his music, and physical stores reported they had been cleaned out of Michael Jackson and Jackson 5 CDs. All 10 of the albums on Amazon.com’s bestseller list Friday were Jackson’s; the 25th anniversary edition of “Thriller,” the bestselling album of all time, was at the top.

Meanwhile, fans were snapping up every Jackson recording they could get their hands on.

Bill Carr, Amazon.com Inc.’s vice president for music and video, said the Web site sold out within minutes all CDs by Michael Jackson and by the Jackson 5. Jackson’s albums accounted for all 10 of Amazon’s “Bestsellers in Music” list Friday, with the 25th anniversary edition of the celebrated “Thriller” album taking the top spot.

Barnes and Noble Inc.’s Web site and retail stores also sold out most Jackson CDs, DVDs and books, and its 10 best-selling CDs were Jackson titles as well.

“They love him,” said Bill Carr, Amazon’s vice president for music and video. “He’s a legend, and they’re anxious to make sure they have his music in their collections.”