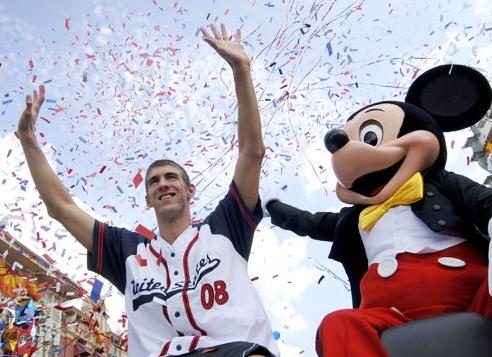 The 23-year-old athlete, who is previously linked to Lindsay Lohan and Carrie Underwood, revealed
in an exclusive interview at Walt Disney World’s America’s Homecoming Parade in Orlando on Friday: “It feels pretty cool. I don’t feel any different. I’m just having fun with this.”

On the other hand, Nicole Johnson wouldn’t confirm a courtship but only revealed: “we’re good friends.”

The 14-time Olympic gold medalist did open up about his strangest encounter with female fans. He described a girl in the crowd at the Disney parade who held up a neon green sign that said “Congratulations, Michael” on one side and “Call me” with her phone number on the other.

The Baltimore native will be sure to attract more female attention when he shows off his acting chops as the host of the season premiere of Saturday Night Live on Sept. 13.

He added: “It’s going to be really strange, but fun. We’ll see if I really am a fish out of water and if I have a comedic side to me. All of my friends are giving me a hard time about it and saying I better not mess up and better not do this or do that.”

The star swimmer is also believed to be included in a cameo role on Thursday for an upcoming episode of HBO’s Entourage, one of his favorite shows.