Barack Obama and Scarlett Johansson became the center of speculation after the reports indicate that the pair was e-mailing and texting each other while the presidential candidate was on the road campaigning. 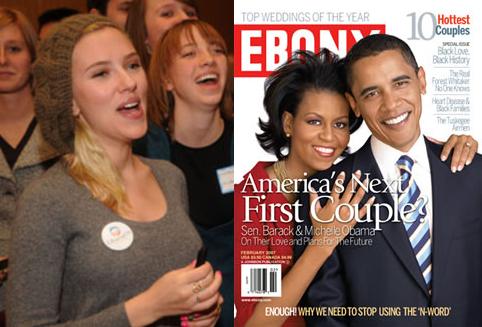 What’s the reaction of his wife Michelle Obama? According to a newspaper report that she has nixed any “Happy Birthday, Mr. President” serenade for Obama if he does make it to the White House.

She revealed that it was the first time in her adult life…actually according to a newspaper report she has nixed any.

According to the report, “Obama’s strong-willed wife Michelle has already poured water on a budding friendship between the presidential candidate and gorgeous actress Scarlett Johansson.” Walker cites “sources” for the details of the report. Why didn’t they just aske her this on “The View”?

When reports surfaced that Scarlett and the senator were exchanging e-mails, Obama’s wife sprang into action to find out what was going on between them, divulged a campaign source. The 23-year-old “Lost in Translation” star, who also fancies herself something of a singer, revealed in mid-June that she had swapped friendly e-mails with Obama for months.

The source revealed, “Michelle hit the roof when she found out Scarlett was publicizing her contact with her husband. Although Michelle’s been told that Scarlett is engaged and her interest is strictly in rallying support for the campaign, she wasn’t happy.”

It should be noted that there is no indication the 46-year-old candidate is romantically involved with Scarlett, but the source pointed told the magazine: “Michelle is incredibly protective and jealous when it comes to Obama. She knows her hubby is a magnet for women.”