Michelle Williams has slammed the paparazzi for refusing to let her grieve in peace following the death of her former boyfriend Heath Ledger in January. 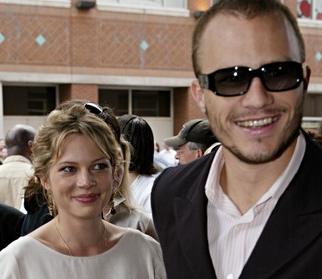 In her first in-depth interview since the tragedy, the star tells the upcoming issue of Newsweek magazine she’ll never forgive the disrespectful snappers who have made her life a misery in the past year – and she won’t forget them.

Williams tells the publication she was particularly disturbed with the efforts some photographers went to just to get a photo of her young daughter Matilda.

She revealed: “It burns a fire inside of me, the s**t that I’ve seen people do to get at me or my daughter. I won’t forget it, and I won’t support it. I don’t want my daughter growing up feeling spied on or threatened.”

And it was one encounter with an over-zealous female paparazzo, which tipped the mellow actress over the edge.

She explained: “I said, ‘You’re better than this. Look at you! You’re young, you’re able-bodied, you have a brightness in your eyes. You’re above this.’ But you know what? She didn’t go away.”

And the intrusion has prompted Williams to seriously think about leaving her home in New York – and walking away from her acting career: “If it gets to the point where I can’t situate my life in a way that they stay away more, then I’ll drop a match on the thing. I’ll be sad. I like to act. It’s saved my life over and over again. It’s given me a sense of self-esteem, self-worth. I have this thing that I’m in love with… and now it has this baggage.”

Meanwhile, Williams admits the grief of Ledger’s drug overdose death still hangs over her daily. She added: “It’s so sad… I just wake up each day in a slightly different place. Grief is like a moving river. It’s a strange thing to say, because I’m at heart an optimistic person, but I would say, in some ways, it just gets worse. It’s just that the more time that passes, the more you miss someone.”