Miley Cyrus is days away from turning sweet 16, and she’s already a superstar but she expressed her desire to be a normal kid. 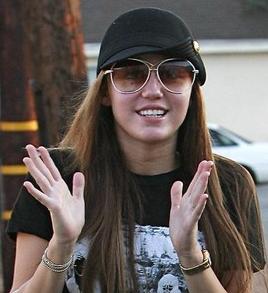 The daughter of country legend Billy Ray Cyrus scored with her Disney TV series Hannah Montana, went multi-platinum with her record albums and was a hit in her first big-screen venture, Hannah Montana and Miley Cyrus Best of Both Worlds, chronicling her sold-out tour.

When asked if she had fun going to recording sessions and only worrying about how you sounded, she replied: “It was great. I kind of went in there in like my pajamas and just hung out. It was fun. No reason to get dressed up. They weren’t taking my picture so it didn’t matter.”

Is it more challenging than “Hannah Montana”, she answered: “You do have to adjust to just being heard and not seen. I had to get used to being expressive and really showing what I feel through my voice. But I’m very animated and upbeat, especially on my TV show, so I guess that helped.”

Miley Cyrus also wrote a song for the soundtrack that you sang with John Travolta, who voices Bolt as she revealed: “It’s called ‘I Thought I Lost You.’ I can’t tell you how much fun it was to sing it with John. I’m going to be bragging about that for the rest of my life.”

If she connect with her character Penny’s love of dogs, she said: “I spend a lot of time with my own. After watching this movie, I went, ‘Oh my gosh, if anything happened to my dog, I would be so upset.’ It just really makes you want to go home and give your dog a hug because it makes you realize how loyal they are.”

Bolt is a dog who’s going through a little self-discovery, isn’t he? She answered: “He believes that he really is the character he plays and I can understand how that can happen. I think it’s really easy to fall into that trap in Hollywood — to believe that you’re almost like an alter ego of your onscreen persona. For me, that would be like this very glam kind of rocker chick. You have to learn how to turn that off when you go home and just sit around and hang out with your friends. So I think it’s a good way to show that you have to learn how to turn that off every once in a while and just go home and be a normal kid.”

If she is tough on herself, she shared: “I’m my own worst critic because I pick apart each little thing. When we did the movie of our tour [ Hannah Montana and Miley Cyrus Best of Both Worlds], I was super nervous because I was watching myself on the big screen. Half of it was no hair and makeup, no wardrobe, no anything. It was raw. It’s what our real life was. That was something new for me.”

If she stress out a little more about how you look after she got “Hannah Montana” clothing line, she added: “I’m not always just perfect but that’s what fashion is about. I think fashion is more like picking your style and wearing it — taking who you are and showing it in your style. Fashion has always been a big deal for me and something that I’ve loved. The clothing line is so fun because it’s not only the kind of things that I like. It’s like more of a Hannah Montana look, where I can go crazy. There’s no saying what I can and can’t do. There’s diamonds on everything. It’s shiny and it’s cool. And it’s also age appropriate, not only for the younger girls, but for kids my age.”