Miley Cyrus glows at the 2009 Academy Of Country Music Awards held at the MGM Grand on Sunday (April 5) in Las Vegas. 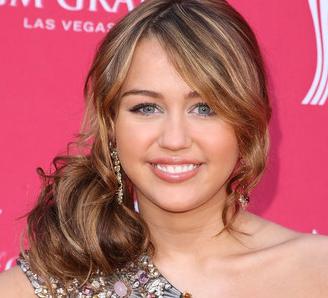 When caught up with the 16-year-old Hannah Montana star before Sunday night’s Academy of Country Music Awards in Las Vegas, she explained that the first rule to keeping her life on the straight and narrow path is to “stay out of Vegas!”

“I can’t be here very long,” she explained. “And I try not to be here as much as possible.”

The 16-year-old Disney starlet worked out a gorgeous Monique Lhullier dress with a jeweled one-shoulder and bustline, Cole Haan heels and H.Stern jewels.

During the ceremony, Miley performed her hit song “The Climb” from her upcoming film Hannah Montana The Movie, out this Friday.