Concerned about the increasing number of underage drinking, Miley Cyrus blames producers of star-studded Hollywood events for including a bottle of vodka in the gift bags. 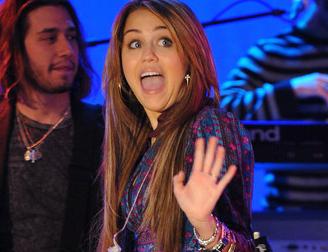 Teen sensation Miley Cyrus has taken aim at producers of star-studded Hollywood events, claiming them as the ones responsible for the increasing number of underage drinking. She blames those producers for promoting underage drinking by not selecting very carefully the items given to invited guests.

Giving one obvious example, the 16-year-old Disney star tells Glamour magazine, “At one of my very first awards shows I ever did, there was a bottle of vodka in my gift bag.” She goes on recalling, “No one cared that they were giving this to a 12-year-old.”

Miley Cyrus previously has publicly declared her vows to avoid living in Las Vegas in a bid to keep her life on the right track. “I can’t be here very long. And I try not to be here as much as possible,” she told OK! Magazine before the 44th Annual Academy of Country Music Awards on Sunday, April 5 in Las Vegas, Nevada.

In another Miley news, she has been snapped lunching together with former boyfriend Nick Jonas at the Village Idiot restaurant in Los Angeles on Saturday afternoon, April 11. During the outing, both of them were seen wearing casual outfits.