Miley Cyrus rode a wave at the Teen Choice Awards. 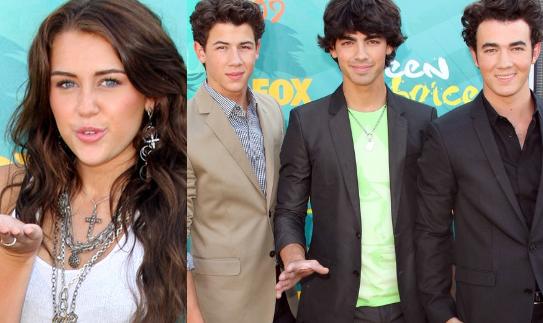 The teen queen sailed away with six surfboard-shaped trophies at Sunday’s ceremony. Cyrus won for comedy TV actress and comedy TV show for “Hannah Montana,” music/dance movie actress and hissy fit for the “Hannah Montana” movie, music single for “The Climb” and summer song for “Before the Storm.” She also presented Britney Spears with the ultimate choice award.

“I’m a huge fans of hers,” Cyrus said before a subdued Spears accepted her own surfboard.

Show hosts the Jonas Brothers kicked off the ceremony by performing “Much Better” on a tiny stage that moved through the audience. They won five awards, including choice male red carpet icons and breakout TV show for “Jonas.”