Miley Cyrus appeared upset and a bit feisty with paparazzi presence while leaving a pet store in Los Angeles on October 21. 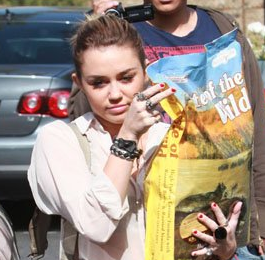 The former “Hannah Montana” star covered her face with a bag of Taste of the Wild pet food, at one point flipping the bird at lurking paparazzi. Meanwhile, she visited the pet store after it has been announced that her film “LOL” is set to be released in the spring of 2012.