Miranda Kerr, who is a Victoria’s Secret model and a girlfriend of Orlando Bloom, graced the cover of Page Six magazine and revealed that she has the Australian dreams of a much less glamorous life. 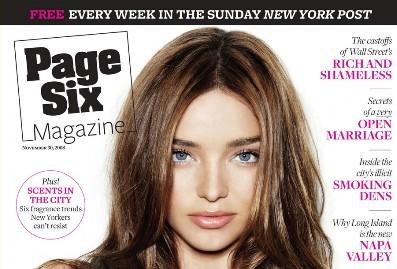 Australian supermodel has admitted there is nothing she would like more than to settle down and raise green children, which is a hint that she wanted to start an eco-friendly family, saying: “My ideal situation would be to live on a farm in a solar-powered house with a hammock and a vegetable patch. I’ve always wanted kids, so someday, eventually, yes, it will happen.”

Despite her family plans, the 25-year-old beauty refused to open up about her relationship with Orlando, 31 as she is a bit more mum on that topic as she explained: “Everyone asks me to talk about him and they get really annoyed with me when I say no, but if you want to know about him, why don’t you go and ask him? I’m sorry, but that’s just how it is.”

On being approached to model: “I was so reluctant to do it at first. I was like ‘Eh, models, they’re like this or like that,’ which was totally wrong on my behalf. But I just felt like I wanted to do something with a bit more substance.”

For now, Miranda Kerr is embracing her work life after she added: “In the last 22 days I’ve been to eight different countries. Honestly, I’m always on an airplane. I spend a lot of time on beautiful little islands, but generally it’s one day here and then flying, then one day there, then fly. But I feel very grateful to have so much work, especially with the economy how it is.”

Up next for the supermodel is an appearance on Victoria’s Secret Fashion Show airing on CBS Dec. 3