Natalie Pinkham, a 22-year-old television presenter, has dismissed reports that Prince Harry is cheating on his girlfriend Chelsy Davy. Natalie was recently spotted with Prince Harry at London nightclub Boujis on Friday night. She has been a friend of Prince Harry for eight years.

Is she having a relationship with Prince Harry? Natalie Pinkham revealed, “There is only one girl in Harry’s life and that is Chelsy.” 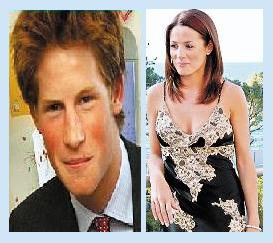 As for the incident where she was spotted with the prince, Natalie said, “I was out with a large group of my friends. That group included Harry because he is one of my friends. We were certainly never out on our own together and certainly never danced with each other.” She added, “At no stage was I on my own with Harry. In fact, I can go as far as saying I have never been on my own in the same room as him – pretty ironic for someone who has been described as the other girl in his life.” She also said, “There is also someone in my life. Fortunately he knows and trusts me so he laughs all this off.”