Natasha Hamilton, who hails from Kensington, Liverpool, was wearing a white bikini in Egypt. 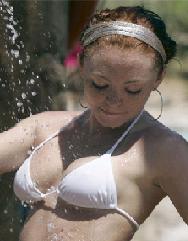 The “Atomic Kitten” member, who was a mother to two boys, was spotted with her fiancé Riad Erraji.

When she was still in a tour, she decided to take a break from Atomic Kitten because she wanted to spend more time with her son, since then they have released several singles. She also split with her boyfriend after falling out over her breast implants.

You can see her clear bikini picture here