It appears that Nick Lachey is ready to settle down with Vanessa Minnillo. According to a new report the singer confided to a friend during a guy’s night out at the W Hotel in Los Angeles that he is ready for round two of marriage now that former wife Jessica Simpson and her meddling dad Joe are far enough out of the picture. 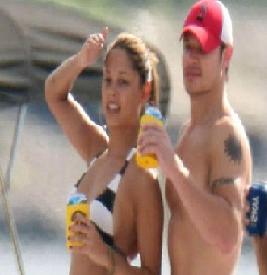 A source dished after two hours of talking about football and computers, Nick Lachey’s eyes lit up as the conversation steered toward Vanessa Minnillo.
When the singer was asked if he was planning to “put a ring on her finger,” Nich Lachey just smiled and replied, “It will happen.”

A fellow diner revealed, “Nick couldn’t keep the grin off his face. His buddy tried to press for more details, but he refused to talk anymore about it.”

Nick Lachey also made a dig at his former wife’s dad, Joe, he revealed, “I won’t have to deal with an interfering father-in-law this time.”