Nicole Richie, who is almost five months pregnant with fiance Joel Madden’s baby, has vowed not to rush up the aisle. 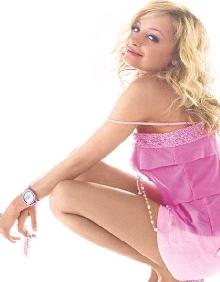 “The Simple Life” star has decided to wait until after her child is born before she gets married.

A source revealed, “Nicole said she doesn’t want the baby to one day grow up and think she and Joel rushed to get married just because she got pregnant. She doesn’t want to get married just to say she did it before the baby was born. She wants to do it according to her own schedule. And it will be done because they are in love, not because they are up against some deadline.”

A source added, “It sounded like it could be stressful pulling it all together so quickly. And Nicole said she’d like time to really enjoy planning her wedding.”

Nicole’s vanity has also been cited as another reason for postponing the wedding because she doesn’t want to look fat in her wedding dress. Another source revealed, “Nicole doesn’t want to get married when she’s all big and fat. She doesn’t want to have to get one of those dresses with a high waist, you know, just to hide her stomach. She wants to look gorgeous for her wedding photos. She’s been eating a lot. She said she’s always hungry, and she’s never been happier about it!”

The insider also claims Nicole and Good Charlotte frontman Joel, 28, have been engaged since last year. The source added, “They started wearing matching bands last winter. They just didn’t tell anyone about it. But the bands were supposed to be promise rings. So, as far as Nicole Richie is concerned, they’ve been planning to get married since before she was pregnant.”