Olivia Munn posed for sexy snaps as she landed the front cover of Complex magazine. 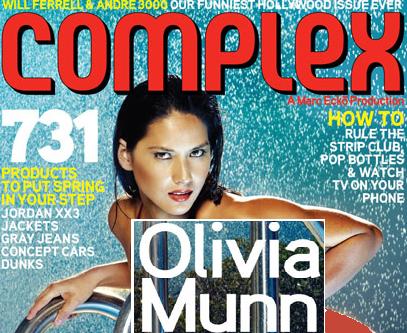 The 25-year-old actress, model, and host of G4 TV’s “Attack of the Show!” will say or do just about anything to elicit a guffaw. She also showed off her bikini body for the sexy snaps in the magazine for its Feb-March 2008 issue, which you could see here and here.

The highlight of her interview:

On ever thinking she’d reach the heady heights of doing a photo shoot with fake e***ulate in her wig, she said, “I’ve always aspired to it, but I didn’t know if it would ever come true. I wanted it in my eye for one of the [There’s Something About Mary homage] shots, but they said it was too much.”

On her favorite classic Hollywood comedies, she revealed, “Office Space is probably my top. When I grew up, everybody had New Kids on the Block posters; I had a poster of Chevy Chase. I kissed him every night. I loved Fletch. Everything that he did, I was like head over heels for.”

On how she hated shopping “with a passion,” she explained, “I don’t have the discipline to become anorexic or bulimic, and when you go shopping all the time, there’s this need to fit into trendy clothes, like skinny jeans. The constant focus on what you look like—I just can’t take it.”

On being aware she was absurdly fit, she answered, “I’m a surfer and I’m OK with being called “athletic looking,” but when people say you look “healthy,” they mean you’re a fatty.”

On guys camping outside stores to buy sneakers and video game consoles, she continued, “My favorite thing on a guy is a cool shirt, sneakers, and a watch, so if a guy’s camping out to get sneakers, that’s cool. I think you can really tell a guy by the kind of shoes he puts on his feet.”

On what guys wear that turns you off completely, she replied, “Anything that looks like an outfit he put more time into than I put into my outfit, matchy-matchy, pink shoes with a pink shirt.”

On being very approachable, she disclosed, “I gave out my [email protected] address on TV once, like “whatever”—and then I got 6,000 emails in one day. I had to make an alternate, but I still use that one. I’ve called fans if they gave me their number, too.”

When asked if germs bothered her when you shake that many hands, she added, “They always have sanitizer for us. The weird thing is, I’m really O.C.D.—I wash my hands a lot and I like things in corners—but when it comes to fans, I forget to sanitize my hands. There were a lot of kisses on the cheek, too, and it just didn’t bother me after a while. I know it sounds gross, but it’s because they’re such nice, normal people.”