As the star-studded tribute to the King of Pop concluded, Michael Jackson’s own children, Prince Michael, 12, Paris Katherine, 11, and Prince Michael II (Blanket), 7, took the stage during a group performance of “Heal the World.” 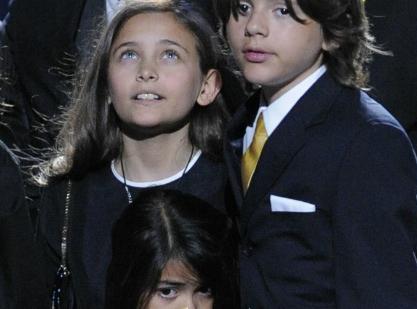 After the song, Paris gave an impromptu speech from the stage surrounded by the Jackson family.

Her aunt Janet Jackson then took her into her arms for a hug before the entire Jackson family then left the stage, closing the service that lasted more than two hours.

The moving tribute was especially startling because it marked one of the first times Jackson’s daughter has ever been heard publicly.

Jackson’s other two kids, Prince Michael, 12, and Blanket, 7, took the stage prior to join others in a sing-along of “We Are the World/Heal the World.”

Paris and her siblings are also the subject of an ongoing custody dispute. Currently, her grandmother Katherine Jackson has been granted temporary custody of the three children, but Debbie Rowe has parental rights over the eldest children which she may choose to exercise.

Blanket’s mother has not been identified.