Thousands of fans braved appalling weather at the world premiere of Harry Potter And The Half-Blood Prince. 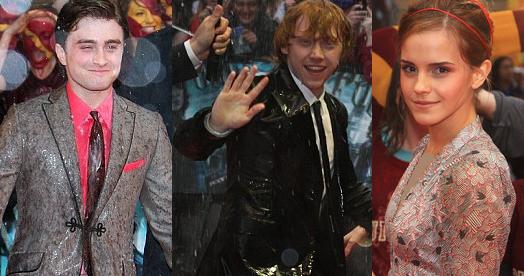 But the fans of the teenage wizard, some of whom had waited since the early hours of the morning to catch a glimpse of the stars, still cheered and waved banners.

Many of the cast, including Emma Watson, who plays Hermione Grainger, wore white ribbons on their wrists in memory of murdered actor Rob Knox.

Knox, 18, who played Marcus Belby in the latest Potter adventure – Harry Potter And The Half-Blood Prince – was stabbed to death outside a bar in Sidcup, south east London, last May, just days after completing the film.

Treading the red carpet at tonight’s screening, Jessie Cave, who plays Ron Weasley’s love interest Lavender Brown, said: “Rob would have loved to be here tonight and it’s just a shame that he’s not.”

The sixth instalment of the wizarding saga sees wicked Lord Voldermort tighten his grip on the world of Muggles and wizards, and even Hogwarts is no longer the safe haven it once was.

Professor Dumbledore and Harry work to find the key to Voldermort’s defences, enlisting the old wizard’s friend Horace Slughorn to help with the task.

Elsewhere, the Hogwarts students find themselves under attack from a very different time of foe, as teenage hormones rage throughout the school.

But at the premiere it was the raging of the elements which the cast had to contend with, though Jason Isaacs, who played the sinister Lucius Malfoy in the earlier films was unsurprised by the fans’ dedication.

“Frankly I think they would turn out in earthquakes and tornadoes,” he said.

“That’s the effect the Harry Potter stories have.

“A lot of people have tried to understand why but nobody really understands – it’s magic.”

Watson, 19, took to the red carpet in a vintage dress by 1970s designer Ossie Clark, while co-stars Daniel Radcliffe and Rupert Grint looked slightly bedraggled in suits, clearly having been caught by some of the rain.

Other stars attending the premiere included celebrity chefs Gordon Ramsay and Jamie Oliver with their families, Clive Owen, Graham Norton and Gary Lineker, who was accompanied by his partner Danielle Bux.

Harry Potter And The Half-Blood Prince goes on general release from Wednesday.