Paris Hilton, who became a baby shower planner of her pal Nicole Richie, was spotted taking a sample of Chinese cuisine in Shanghai. 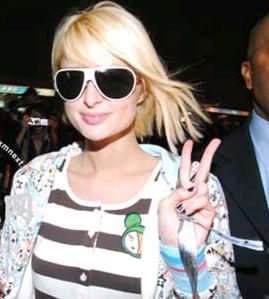 The hotel heiress gets stuck into a plate of Chinese dumplings in Shanghai, where she is to present an award at the 2007 MTV Style Gala.

The socialite, who hit the headlines because of her steamy video of taking a bubbly bath, shunned the Hilton hotel chain in Shanghai. She opted to check into the newly opened Hyatt on the Bund for her first trip to the city.

An employee of MTV China, who asked not to be named, revealed, “The panoramic Bund view from the hotel room seemed the major reason to attract her there. Hilton hopes to gain a better understanding of the city’s landmark charm within a limited time.”

Paris Hilton has already booked three sets of evening dresses from Xintiandi’s Shanghai Tang for the gala, including a traditional qipao.

There are suggestions from MTV China that the socialite might put on a mini fashion show. She is also set to visit the Shanghai Museum and Oriental Pearl TV Tower this weekend.