Paris Hilton, who was previously reported to invite Prince William to Las Vegas, rumored to has celebrated her eight-month anniversary with rocker Benji Madden by phoning home from London to clear up royal romantic rumors. 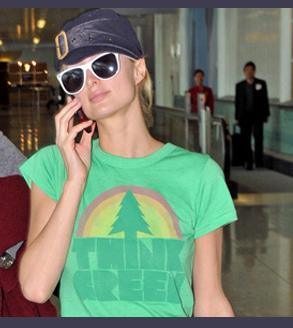 The socialite called in to Ryan Seacrest’s radio show in Los Angeles on Tuesday morning to address British tabloid reports she has been caught flirting with British Princes William and Harry after meeting the royal brothers at the London.

Paris Hilton admitted that she has met with William and Harry but she dismissed the romantic rumors and she revealed that she did not text love notes to either of them.

She revealed: “They’re very nice boys, very down to earth and sweet but there’s nothing romantic going on at all. They just came up and said hello. There’s no texting going on; I’m reading that I invited them to Las Vegas to a club – that never happened.”

She continued: “I have a boyfriend, it’s an eight month anniversary today. I would never say that in a million years and it just annoys me that particularly the media out in the UK, they will not only make up stories, they’ll also go as far to make up quotes that I supposedly said.”

She added: “[Prince] William was really nice… [Prince] Harry was with his girlfriend, Chelsy [Davy], who was so stunning, beautiful and sweet… They were just very friendly, they weren’t flirting at all. I’m taken, I don’t put it out that I’m single. Before, I wasn’t in love… I would never hurt him [Benji Madden].”

Regarding the reports Madonna’s estranged husband Guy Ritchie treated the socialite to a tour of his Sherlock Holmes set, she admitted that she was upset, saying: “I didn’t even know there was a Sherlock Holmes movie… It’s so ridiculous. I did meet him (Ritchie) at his pub (The Punch Bowl) and he was very nice.”

Meanwhile, Paris Hilton, who is in London shooting a British version of her reality show My BFF is planning a very romantic weekend with Madden, who flies to the U.K. weekly to hang out with his girlfriend.

She added: “There’s a big carnival fair here so we’re gonna go on some rides and then go for a nice dinner and hang out in the room.”

Benji Madden had roses and caviar delivered to Paris Hilton’s hotel room this morning as an eight month anniversary gift.