Paris Hilton, the singer of “Stars Are Blind”, has been released from prison, after just three days. 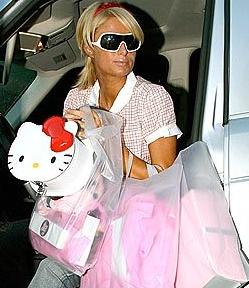 The hotel heiress, who received a 23-day sentence for driving with a suspended license, has left California’s Century Regional Detention Facility and been put on 40-day house arrest.

Steve Whitmore, spokesman for the Los Angeles County Sheriff’s Department, revealed Paris was released for “medical reasons” and had now been fitted with an ankle bracelet, which will be used to keep track of her whereabouts.

The spokesman could not give out exact details of the socialite’s ailment due to US privacy laws, saying: “I cannot specifically talk about the medical situation other than to say that yes, it played a part in this.”

Paris, 26, will be confined to living within a space of around 3,000 to 4,000 square feet at her lavish home for the duration of her tagging, and will not be allowed out for any social or work-related events.

The blonde star was released after midnight in the early hours of Thursday morning, June 7 and was officially “re-assigned” to house arrest at 2.09am.
Paris’ sentence has now reverted back to the original 45-day sentence, and because she checked into the correctional facility on the night of June 3 and was discharged on Thursday morning her total time in jail amounts to five days.
During her brief stay in prison, Paris was placed in a solitary confinement cell that measured just 12 by eight feet.
It had a bunk bed, a toilet, washbasin and two small windows.