It became a mystery on how Paris Hilton manages to transform her “barely there” chest to a buxom cleavage. 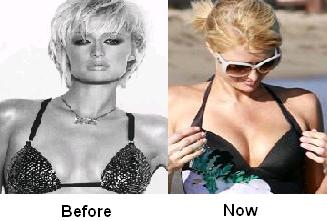 The heiress has said she considered having breast implants as a teenager, and even begged her parents for permission to go under the knife, but was eventually talked out of it.

She has revealed, “Years ago, I asked my dad for a boob job and he said it would cheapen my image.”

Perhaps her increased bust size is because of an old fashioned push-up bra trick.

The “Stars Are Blind” singer joined Entourage actor Adrian Grenier on the sand to film a segment for a program on celebrities and paparazzi, according to reports.