Penélope Cruz, who was recently linked to Bono, shows off her curves as she cruises along on a shopping trip in trendy Saint-Tropez. 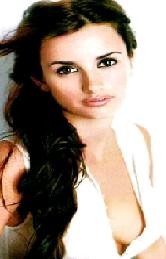 The Spanish actress of the film Sahara looked fabulous in a figure-hugging black dress. The star was spotted visiting a string of trendy boutiques on the French Riviera.

A spectator revealed, “Penélope looked beautiful. She has an amazing figure.”