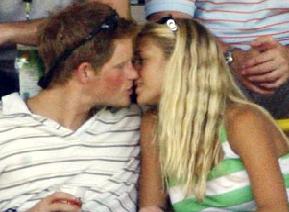 The 22-year-old prince and Zimbabwean-born girlfriend were photographed tearing down the Okavango Delta in Botswana on an early morning adventure.

The smitten couple has spent the past seven days in the wildlife-packed area, camping and cruising down the river.

A source revealed, “The holiday was a perfect opportunity for Harry to show off his macho Army skills to his own African Queen.”

Officer Harry is currently on leave from his Household Cavalry regiment the Blues and Royals.

Last month, it was revealed Harry’s Army regiment will be deployed to Afghanistan in October, fuelling rumors the prince could still go to the frontline.

Britain’s Defense Minister Des Browne announced Harry’s Blues and Royals regiment would join extra troops being sent to the war-torn country, but did not confirm or deny whether the young prince would be among the soldiers deployed.