Prince Harry was seen clubbing with ravishing former flame Natalie Pinkham until 3.30 AM on Saturday. 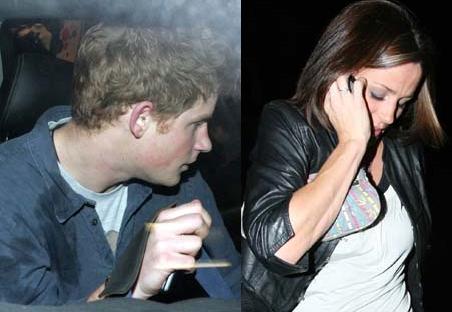 Prince Harry, 24, and Natalie, 30, later joined a group of friends at a pal’s Mayfair flat and stayed there till 4:30 AM, leaving separately within minutes of each other.

Earlier, Prince Harry accompanied by two Scotland Yard bodyguards arrived at south-west London address to pick up Pinkham, but the presence of paparazzi triggered a quick change of plan. Natalie received a phone call and opted to hail a cab instead.

“There were a lot of phone calls and the pair of them were laughing. They are clearly great mates and saw the funny side,” an onlooker told News of the World.

Nataile, a British sports television presenter, was first introduced to Prince Harry by her former boyfriend and England rugby team captain Matt Dawson in 1996 during the 1999 Rugby World Cup.

In 2006, Harry was seen kissing Natalie goodnight in a darkened stairwell after a party. The same year old private pictures of the Prince fondling Pinkham’s breasts emerged.

Pinkham, denied any romantic linkage with the Prince and successfully sued for damages and retrieval of the earlier stolen private photographs.

Prince Harry and Chelsy Davy, 23, ended their five year relationship in January. Since then, Harry has been linked with blonde Astrid Harbord, whom he took to Clarence House at 3.15 AM last month.

Harry and Chelsy reportedly remain in touch and continue to be good friends, but both seem to be savoring their single status.