A young hero who made up food parcels for troops asked Prince Harry what to send and was told: “Chicken tikka masala.” 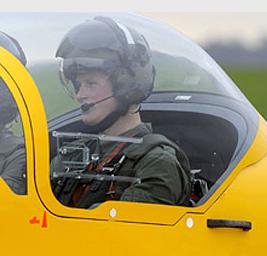 Prince Harry, who has served in Afghanistan, told ten-year-old Keaton Peppiatt he dreamed of the Sainsbury’s ready meal curry when he was on the frontline.

Keaton, of Bexhill, East Sussex, proudly wore his Help for Heroes wristband. Harry showed his own wristband on stage and told the lad: “Snap!”

Meanwhile, “thrilled” Prince Harry, who was recently spotted at the pheasant shoot with Prince William, Kate Middleton and mystery blonde friend, gets go-ahead for pilot training.

The 24-year-old royal has been told that his application as an army helicopter pilot has been successful after a month’s assessment. The third-in-line to the throne will transfer to the Army Air Corps in January.