Prince William yesterday began a four-month course to learn all about the ethos of the service as he prepares to become head of the Armed Forces one day. 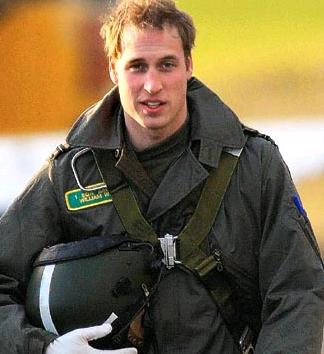 The 25-year-old prince took off in a dual-control Grob 115E for an hour-long flight from Cranwell, the force’s elite training school in Lincolnshire. He later described the experience as “exhilarating”. He is still an officer with the Household Cavalry’s Blues and Royals, but will be known as Flying Officer Wales and wear RAF uniform throughout his detachment.

The prince wore his olive-green flying jumpsuit, complete with zips and his name tag “William Wales”, and the distinctive navy blue forage cap with two brass buttons at the front and an RAF emblem on the side.

His instructor, Squadron Leader Roger Bousfield joked: “There’s a lot of weight on my shoulders being responsible for his safety, especially when it’s just me and him 10,000 feet in the air. But he’s also responsible for my life and I have every faith in him – I think.”
By the end of his course William should be able to fly solo and perform the loop-the-loop.

His schedule means that Prince William will be parted from his girlfriend, Kate Middleton, for her 26th birthday tomorrow.

If successful on the course Prince William will be awarded his RAF wings when he graduates in April. He will undergo a shortened version of the air force’s standard pilot training course and will follow his stint in the air force with several months with the Royal Navy.

Some questioned the training for William at a time when the military complains of being overstretched due to the conflicts in Iraq and Afghanistan.

A spokesperson from the anti-monarchist group Republic, called the prince’s flying lessons “a disgraceful waste of resources.”