Holly Willoughby is desperate for Prince William to compete on “Dancing on Ice”. 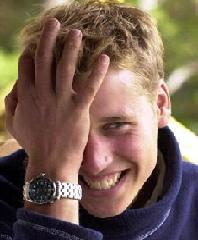 The 26-year-old, who is the presenter of a celebrity ice-skating show, revealed she would love to see the prince take to the rink so she could meet his grandmother Queen Elizabeth II.

She revealed, “I think Prince William would be good on the show. Imagine, the Queen would come down to the live shows. My co-presenter Philip Schofield and I would have to curtsy!”

Prince William and his brother Prince Harry admitted to being avid fans of reality TV in an interview last October.

When asked if they watched either the British or American version of musical talent show “Pop Idol”, Prince Harry pointed at Prince William and said: “He won’t admit to it but we did both watch it, especially the American ‘Pop Idol’.”

Prince William also revealed the siblings often fight for control of what they watch on TV, saying, “We like the same sort of things, although there is usually an argument over the remote control at home about who watches what – that usually goes on for quite a while.”