Prince William today revealed that he was left with a ‘Harry Potter scar’ after being hit around the head with a golf club when he was a boy. 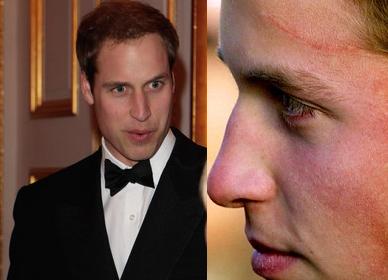 The Prince said the scar ‘glows sometimes’ – like that of the boy wizard – and had been caused by a friend wielding a seven iron while on a putting green.

The 26-year-old also revealed an unlikely childhood dream of becoming a policeman, during an exclusive interview conducted by a 10-year-old cancer patient.

The aspiring Royal correspondent, named Alice, is a patient at the Royal Marsden Hospital, where Prince William is lending his support for a new cancer center for children and teenagers.

During the interview Prince William explained how he got a scar on his head, which has been photographed looking inflamed after he plays sport.

Pointing to his forehead, he told Alice: “That was for my Harry Potter scar, as I call it, just here. I call it that because it glows sometimes and some people notice it – other times they don’t notice it at all.”

He revealed: “I got hit by a golf club when I was playing golf with a friend of mine. Yeah, we were on a putting green and the next thing you know there was a seven-iron and it came out of nowhere and it hit me in the head. So, yeah, I was in hospital for that, but that was very minor compared to how many times you’ve been into hospital.”

When aspiring reporter Alice quizzed him on his ambitions as a boy, he revealed he had aspired to join the constabulary – but eventually settled on Army, saying: “A long time ago I wanted to be a policeman, when I was younger. I soon learnt that probably wasn’t a good idea. At the moment I’m still doing some sort of helicopter flying, doing search and rescue. It’s going very well.”

He added: “My instructors would probably say, ‘Not so well’, but I think it’s going not too badly. I haven’t managed to dent any of the aircraft, I haven’t flown into any trees yet, so, it’s going okay.”

During his the interview, conducted at Clarence House, William said he was following in his mother’s footsteps by lending support to the Royal Marsden Hospital.

He undertook a stint of work experience there in 2005 and was appointed president of the world-renowned hospital in 2007, a position previously held by his mother Diana.

The Princess opened the current children’s unit at the hospital in 1993, saying: “For a very long time my mother was involved with the Royal Marsden, and she had a very close connection with them. So I wanted to follow in her footsteps, in that sense, and help. Since doing that [work experience] I’ve learnt so much and met so many incredible people who have been unfortunate enough to, you know, have cancer – and most battle through it and have dealt with it in an incredibly inspirational way.”

The Prince was also clear on who would win an arm wrestle between himself and Prince Harry.

He responded: “You know the answer to that. It’s not even a contest. Obviously I’d win. Obviously. As the bigger brother you have that psychological power over your brother, you see.”

Revealing what he would do if he were invisible for a day, he said: “I’d probably get myself in a lot of trouble. I’d probably go into the newspaper office, and I’d hide in the background and listen to all the stories they talk about me.”

The Prince’s interview comes after he spoke last week of the ’emptiness’ he feels on Mother’s Day following the death of his mother 12 years ago, in a speech to mark the launch of the Child Bereavement Charity’s Mother’s Day campaign.

Tessa Green, chairman of The Royal Marsden Hospital, said: ‘We are delighted that our president, Prince William, has given an exclusive interview with CBBC Newsround to highlight our £15 million appeal to build Europe’s leading Children’s and Teenage Cancer Center.’