Princess Beatrice proved it’s a tall order being fifth in line to the throne as she stepped out in a pair of five-inch stilettos. 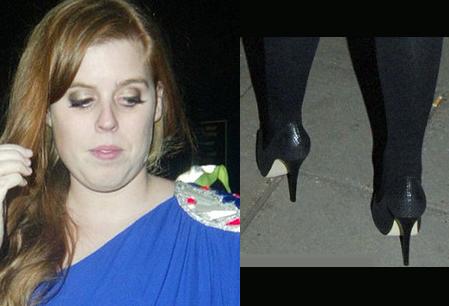 The 20-year-old princess and university student put on her party feet along with a blue dress and matching jacket as she enjoyed a night out in London yesterday.

Despite co-hosting a party for charity Children in Crisis at the Roger Vivier shoe boutique and later enjoying a four-hour dinner at the China Tang restaurant with friends, Princess Beatrice managed to totter around comfortably in the shoes for the entire evening.

She later revealed the secret to staying on her feet – heel pads.

She said: “I love high heels but Party Feet are better. They are little pads that go inside so that your feet don’t hurt.”

She added: “If the shoes are really beautiful, like Roger Viviers, then I don’t mind how high the heel is.”

Princess Beatrice has had plenty of practice partying in heels in recent months.

She has thrown herself into the student lifestyle since she began studying for a BA in History and History of Ideas at London’s Goldsmiths College.

Earlier this month she and sister Eugenie – fresh from their trip to Milan Fashion Week – joined their mother on the red carpet for the premiere of The Young Victoria.

Princess Eugenie is currently enjoying a gap year before she follows her older sister to university.

But the 18-year-old’s plans for a three-week trip around South America have been canceled after her father Prince Andrew raised concerns about her safety.