Princess Beatrice, who wore a glamorous green Marchesa gown studded with crystals, was no doubt hoping to attract some admiring glances. 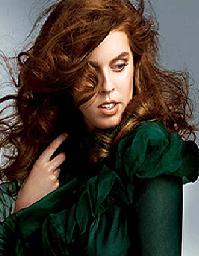 The daughter of Duchess of York Sarah Ferguson arrived at the star-studded event at the Royal Albert Hall. She stepped out of her car and her bodice slipped down – revealing rather more décolletage than royal protocol might allow.

The 19-year-old princess’s accidental slip happened after the Fashion Rocks extravaganza at the Royal Albert Hall on Thursday night.

An onlooker revealed, “Beatrice looked stunning however her dress was a bit too big. She had to keep hoisting it up to protect her modesty.”

The young princess was ushered into the venue by her hosts and a bodyguard who tried to ensure that nobody stood on her trailing pale green gown. She appeared rather nervous on arrival but soon relaxed with a drink in her hand.

She chatted to Kelly Osbourne about the pitfalls of her delicate outfit. She remarked, “I love it but I keep on having to lift it off the floor and pull the bodice up.”