Princess Eugenie will start a three-year degree course at Newcastle University in the autumn, according to a report. 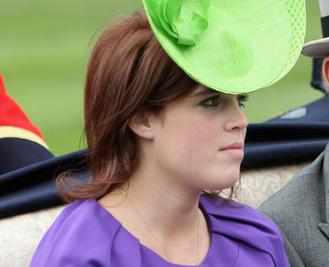 The 19-year-old royal will study for a BA in English and history of art but it is not yet known whether she will take up a place in one of the university’s halls of residence.

Although the Geordie city seems an incongruous choice for a member of the Royal Family, the university has become incredibly popular amongst the Sloaney set in recent years and several of her friends are understood to be going with her.

The Queen’s granddaughter spent the day yesterday looking around the university campus and examining possible halls of residence accommodation with her police protection detail.

En-suite rooms in the college’s halls of residence cost between £84 and £119 per week.

A friend said: ‘ She’s very excited about heading off there in September. She chose Newcastle because it offered a great degree course and it seems a really fun place to go.’

Eugenie, the younger daughter of the Duke of York and Sarah Ferguson, will study under the Faculty of Humanities and Social Sciences.

The university is home to more than 18,000 students from more than 100 countries and occupies a 50-acre site at the heart of Newcastle city centre.

Fortunately for party-loving Eugenie, who is sixth in line to the throne, Newcastle boasts one of the best student social scenes in the country with more than 130 student societies and six student union bars to choose from.

Eugenie, who studied at exclusive Marlborough College, a £23,000-a-year boarding school in Wiltshire, officially became the brainiest member of the Royal Family by scoring two As in her A-levels last summer, in art and English literature, as well as a B in history of art.

She went on to enjoy a highly controversial gap year which saw her partying in places as far flung as Australia, India, South Africa and Cambodia.

Earlier this year, the Queen’s granddaughter was spotted sunbathing topless on the beach in Thailand followed by a raucous night dancing on a table in a bar.

Eugenie will continue to receive a police guard throughout her time at Newcastle, which will almost certainly mean at least one officer will need to live next door to her, regardless of whether she chooses a room in a hall of residence or a private house.

Meanwhile, the young royal was seen as she talked to Jake Warren in the parade ring on the fourth day of Royal Ascot 2009 at Ascot Racecourse on June 19, 2009 in Ascot, England.