Victoria’s Secret angel Karolina Kurkova surprised onlookers with her almost invisible bellybutton at last week’s show in Miami, but her representative managed to provide an explanation behind this mystery. 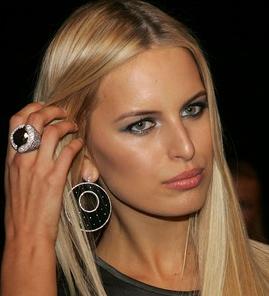 Her representative revealed: “She had an operation when she was an infant. It’s a fact and just thank God, she’s healthy.”

The mystery of her strangely smooth tummy surfaced again as the Czech supermodel strutted her stuff on the runway in Miami two weeks ago.

There was simply an indentation where the center “button” should have been.

And don’t be fooled by the glossy magazine spread: though the voluptuous blond seems to have a perfect button in the pages of magazines and catalogs, industry sources have revealed that is usually the result of photo retouching.

So what belly button condition could baby Kurkova have had? According to doctors, it was likely an umbilical hernia.

Dr. Matthew Schulman, who is a plastic surgeon at Manhattan’s Mount Sinai Medical Center, revealed: “It does look like [she may have had] an umbilical hernia as a child that was either fixed or not fixed, which can distort the belly button.”