Ricky Martin spoke candidly in an interview at home in Puerto Rico about his desire to be a parent, the decision to seek the help of a surrogate and juggling caring for twins. 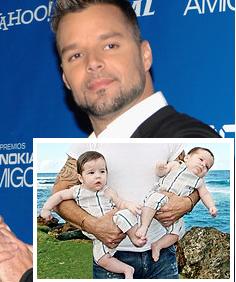 His -month-old twin boys, namely Matteo and Valentino Martin, finally make their debut in the week issue of a magazine.

Here are the highlights of the interview with the 36-year-old singer:

On how he describe this time in his life,Ricky Martin replied: “I’m so happy! Everything they do, from smiling to crying, feels like a blessing. Being a father feels amazing. This has been the most spiritual moment in my life.”

On how hands-on he really is as a father, he answered: “I don’t have a nanny. I’m doing this on my own because I don’t want to miss a moment. I have a personal assistant who helps me, someone who takes care of me while I’m taking care of them, but I’m the one who changes the diapers, the one that feeds them, the one that bathes them, the one that puts them to sleep. For any parent, the first couple of months tend to get a little bit intense.”

On why he chose to become a parent via surrogate, he shared: “Adoption was one option, but it’s complicated and can take a long time. Surrogacy was an intriguing and faster option. I thought, ‘I’m going to jump into this with no fear.'”

On his twin’s [Valetino and Matteo] personalities, he revealed: “Valentino loves to sleep. I call him ‘Mr. Peace and Love’ because he’s so chill and serene. Matteo is more alert and active. He was up at 3 a.m. the other night and just hanging!”

On his philosophy on raising your sons, he added: “I love to read books to my sons and tell them stories. I play music for them so they develop their own personalities. I want to give them information and raise them with honesty and love, and give them self-esteem and a lot of acceptance.”