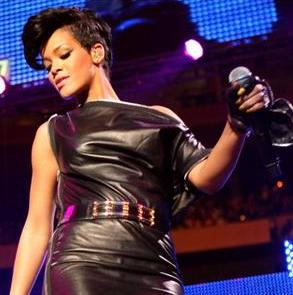 “The Umbrella” hitmaker performed at the event along with boyfriend Chris Brown, Kanye West, Katy Perry, Ne-Yo, GaGa, David Archuleta and others.

Rihanna, who is one of the boldest celebrities when it comes to fashion, has lived up to her style icon image through the year, carrying off styles which many others would just dream of owning.

On Friday, the singer carried off her figure hugging mini black leather off shoulder dress with aplomb. The dress was accented with a crystal belt at the low waist and zipped on the sides as well as on the shoulders – keeping many on the edge for a malfunction! Her matching zipped gloves served as an extension to the dress. She left the front of the gloves open exposing her yellow patterned nails.

The pop-soul diva is allowing her much copied cropped cut hair to grow, making us wonder how she is going to style them next.

Rihanna, 20, and Brown, 19, will both perform next on Monday, December 15, for KDWB’s annual Jingle Ball at Xcel Energy Center, St Paul, MN.

They recently returned from a tour of Australia and New Zealand, where Brown shared the stage every night with Rihanna to sing her mega hit, Umbrella.