Pop star Rihanna looked as if she hadn’t a care in the world at a family party last night. 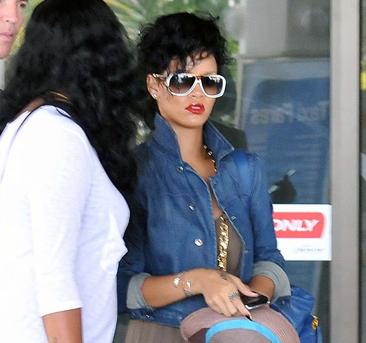 The 21-year-old singer has returned to her native Barbados to help her grandparents’ celebrate their 50th wedding anniversary.

But while she relaxed, her one-time boyfriend Chris Brown was preparing to appear in a Los Angeles court.

Brown is due in the dock tomorrow to face charges he assaulted the singer during a heated argument the day before the Grammys.

And although she initially stood by the R & B singer, the couple have now reportedly ended their relationship.

After getting back to work last week, recording tracks in an exclusive Hawaii studio, Rihanna flew home for a catch-up with her family on Friday.

And last night she and her family were joined by the island’s Prime Minister David Thompson as they celebrated.

The smiling singer waved a Barbados flag as she caught up with her friends.

Her father has said the singer is ‘back to herself’.

Ronald Fenty said: “Of course, I’m happy to have her home. Things are good with her. She is doing really, really well. She’s back to herself again.”