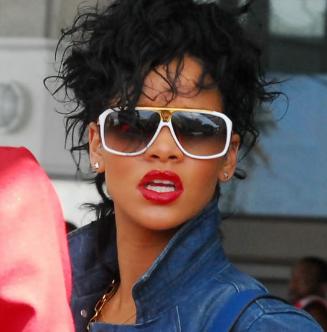 R ‘n’ B singer Rihanna has flown back home to her native Barbados on Friday, April 3 after traveling to Hawaii, Los Angeles and New York in recent days. Her father Ronald Fenty confirmed in a telephone interview with US Weekly, “Yeah [she’s back]. She just got in a couple hours ago. I will see her tomorrow.”

Rihanna is said to help her grandparents celebrating their 50th wedding anniversary. Still according to the songstress’ father, the family will “probably do lunch” during her weekend trip home. “Of course, I’m happy to have her home. Things are good with her,” according to Ronald, adding that Rihanna “is doing really, really well. She’s back to herself again.”

Prior to touching down in Barbados, Rihanna was spotted on Wednesday, April 1 walking through Honolulu airport. At the occasion she was photographed wearing white outfits paired with blue-colored long blazer. She carried a big blue handbag and wore sunglasses. On top of all, she was spotted sporting new hairstyle.

Meanwhile, speculation is mounting on whether or not Rihanna will attend Chris Brown’s court hearing scheduled for Monday, April 6 regarding the felony battery accusation addressed to him for assaulting her back in February. Speaking on that matter, her lawyer Donald Etra has been quoted as saying, “She will do everything that the law requires her to do.”