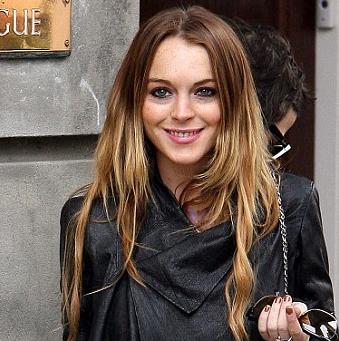 There was major drama in L.A. late Friday night at Bar Marmont, where Sam was DJ-ing at a party for her fashion designer sister, Charlotte Ronson’s I Heart Ronson clothing line for JCPenney. It all started when Lindsay tried to get into the party, only to be held back at the door by five bouncers!

Sources revealed that the doormen were apparently under strict instructions from the Ronson family to look out for Lindsay and not to let her in under any circumstances.

The party officially ended at 11pm on Friday, but an hour later, Sam was still spinning records inside, while Charlotte, their brother Mark — whose band played an hour-long set at the event — and their mom, Ann Dexter Jones partied on.

Before Lindsay’s arrival at the event, an insider said that the Ronsons had gone out of their way to insure she wouldn’t be able to get inside. “Unless Lindsay rams a truck through the red carpet or skydives in, she won’t be here,” revealed the source.

But just as expected, Lindsay still showed up, only to be “restrained from coming in by five security guards,” according to an onlooker.

“Lindsay knew she was unwanted, but came anyway, to no avail,” said another source.

Sources revealed that Lindsay was doing everything she could to get into Sam’s sis’ party — including an attempt to scale the wall!:
“Eventually Lindsay’s friends, the D squared designers who were staying at the Chateau, took pity on her and said they would look after her so they let her into their rooms. But the minute they let her in, Lindsay tried to sneak into the party again! Poor girl just couldn’t get in …”

Judging by her behavior inside the event, Sam was completely fine being in a No-Lohan zone. “She looked like she was in a great mood,” according to one witness.

While Lindsay Lohan couldn’t get beyond the guardians at the gate, other celebs, including Nicole Richie, Molly Sims, Sting and Jewel, had no problem getting into the event. Even Paris Hilton was welcome. The celebutante arrived around 10:15pm on the arm of her boy-toy Doug Reinhardt. “She really seemed to be glowing!” according to one partygoer.

SamRo had a locksmith at her house yesterday changing the locks to her Hollywood Hills house where she and Lindsay have living together for at least six months.

It was a second night in row that Lindsay had displayed some odd and seemingly unwelcome behavior.

On April 2, also in L.A., she suddenly popped up onstage in the middle of pal Lily Allen’s show — only to be all but ignored by the British pop star.