She may not sing on the track, but Rihanna is the star of the video for Kanye West’s song ‘Paranoid.’ 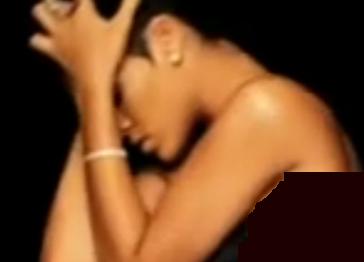 Dancing alone while staring into the camera for much for the video, Rihanna is dressed alternately in a sheer boned corset and a snug white dress. Proving how recently the video was filmed, her new gun tattoo is visible under her right arm.

Meanwhile, Rihanna’s attorney says she will appear at a hearing next month as a possible witness in the assault case against Chris Brown, who was arrested on suspicion of hitting and choking the singer hours before the then-couple were scheduled to appear at the Grammy Awards.

Donald Etra says prosecutors have told him Rihanna will receive a subpoena to testify at a preliminary hearing June 22 and that she will comply with the order. The hearing will focus on whether there is enough evidence to continue the case against Brown.

The hearing would mark Rihanna’s first appearance in court since felony assault and criminal threats charges were filed against Brown in March following the February incident.

If she is called to testify, the 21-year-old singer would be subject to cross-examination by Brown’s attorney, Mark Geragos.

A judge on Thursday rejected a motion by Geragos to receive police and investigative records related to the case and the apparent leak of a photo of a beaten and bruised Rihanna.

Los Angeles Superior Court Judge Patricia Schnegg told Geragos the motion was premature and he could file it again after the preliminary hearing.

Brown wasn’t in court Thursday, but he’s required to attend the preliminary hearing. The 20-year-old R&B singer faces possible sentences that range from probation to nearly five years in prison if convicted.

Geragos argued that he should have access to the records to properly cross-examine police witnesses during the preliminary hearing. He also said intense public interest in the case should require the records’ release.

Schnegg said Brown’s fame wasn’t an issue she was going to consider. She also called Geragos’ motion “a fishing expedition.”

She also said the records, which Geragos wants to use to search for police bias or misconduct, don’t have anything to do with Brown’s arrest. She said officers responded to an emergency call and the “Run It!” singer was arrested well before the photo of Rihanna’s battered face was posted by celebrity gossip Web site TMZ.