Rihanna takes control in a black puff sleeve suit, white ruffle shirt and black bow tie by Dolce & Gabbana at the “Model as Muse: Embodying Fashion” Costume Institute Gala at The Metropolitan Museum of Art in New York City on Monday (May 4). 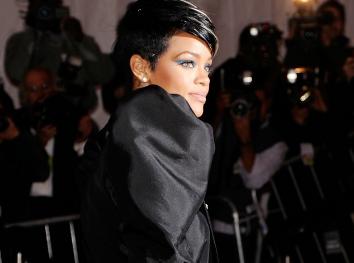 It was her first such appearance since then-boyfriend Chris Brown allegedly beat her in February.

Rihanna arrived in black _ including both the SUV and her Dolce and Gabbana suit and bow tie. She was the last celebrity to walk the carpet and did not speak with press.

“Vogue” editor Anna Wintour once again hosted the gala, which this year served as the kickoff to “The Model as Muse: Embodying Fashion” exhibit. Kate Moss co-chaired the event with Justin Timberlake.

Meanwhile, Rihanna’s first public performance since her alleged assault by Chris Brown has been abruptly scrapped.

The 21-year-old R&B star had been scheduled to perform later this month in the United Arab Emirates. But Yassin Matbouly, of would-have-been concert organizer Vibe Entertainment Management Agency, said in a statement that she’s not yet ready to return to the stage.

“We want to share with you that Rihanna and her management will not be accepting to hold a public concert at this time as it is not appropriate timing for her,” he said.