Rihanna, who wore a low-cut dress in American Music Awards, has hit the cover of Mexican FHM issue. 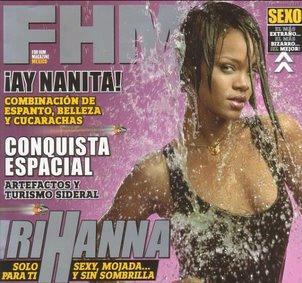 The “Umbrella” singer wears a sexy black dress with shower rain effect on the magazine cover. She has previously hit the covers of FHM France last October. You could see her photos from the Mexican FHM magazine here.

As for the other news, Rihanna skipped doing press after she picked up the Favorite Soul/R&B Female award at the recent awards, instead the singer headed to LAX Airport on November 19.

At that time, the singer was casually dressed Rihanna and she was being shielded from the obnoxious paparazzi by an assistant.