Robert Pattinson dished that he got nervous for the upcoming film, “Breaking Dawn: Part I,” after finding out he’d have to do shirtless scenes. 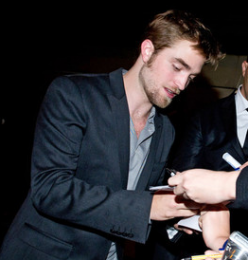 After seeing how much co-star Taylor worked out for the films, the British actor tried to think about positions where he could tense the muscles and suck in his belly. He could not quite achieve Taylor’s physique even though he worked out for “Breaking Dawn” because the first thing he thought was it is time to eat after filming the scene.