Before jetting off to Vancouver to begin filming Eclipse, Robert Pattinson and Kristen Stewart got some downtime together and enjoyed a concert Thursday night and then again, Friday night, in Hollywood. 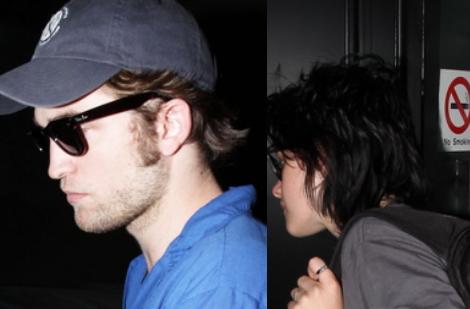 The Twilight stars snuck into Bobby Long’s concert at Hotel Cafe about three songs into his set with Pattinson’s close pal Marcus Foster (who wrote a song on the Twilight soundtrack) on Thursday. The group watched the performance from a curtained off area on the stage where there was sound equipment and a few bar stools.

“Robert was super low-key when he walked in,” an onlooker tells revealed, adding Stewart, 19, and Pattinson, 23, went unnoticed by fans the entire night. After Long, a friend of Pattinson’s, finished his set, the group quickly exited the venue and jumped into a waiting cab.

The two headed out for a second night in a row Friday, this time catching Foster’s show at Hotel Cafe.

“Kristen and Rob, just the two of them, came in and walked towards the curtained-off area on stage where they watched Marcus,” says a source. “They seemd to go unnoticed.”

Stewart and Pattinson later showed up together with a group of pals at the Chateau Marmont, and hung out well into the night.

While the two have remained tight-lipped on their relationship, the actors have spent time together off set – and are more than costars, according to a source.

“Word on the set of Twilight is that [Michael] Angarano, [Kristen’s boyfriend], and she are completely broken up,” a source said. “While people don’t want to talk about it, everyone is pretty convinced that Pattinson and Stewart are hooking up.”