Fans who think they could never get enough of Robert Pattinson will probably get what they wished for in upcoming Salvador Dalí biopic Little Ashes, in which the Twilight hunk had to bare it all. 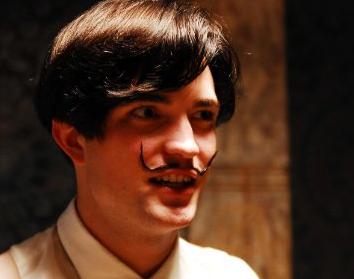 So how did he deal with it?

“I had so many ridiculous answers just come into my head,” he laughs in a new interview with MovieFone on how he prepared himself to take it all off. “I had a penis implant!”

“I don’t know, I just kind of, it’s funny because Spanish people are so … have no problem with nudity at all, I mean at all, and English people obviously do have, like, the most enormous problem with it.”

With newfound fame comes embarrassing interviews, as well as a different view of the world around you. And RPatts, who is adored by legions of girls and women the world over, is definitely feeling that change in his daily life.

“It’s quite stressful in a way, but it’s only when you’re by yourself. When I have my friends around it doesn’t make any difference. I just spend a lot of time by myself, and I used to walk around the block by myself in various different cities, and I don’t know, you start to feel a bit vulnerable,” he admits.

The difference is apparent on the set of New Moon as well, he says, as it used to be easy for the cast to get together for dinner every night and just hang out.

” Now it’s quite difficult to even leave the hotel,” he reveals. “And all these random little stories become some way, somehow newsworthy, so you have to be very secretive about everything. Even if you want to just clarify something in the script or something. It’s just strange. It’s just very different … It’s very strange when you’re aware of being observed, I guess.”