Robert Pattinson takes another role on the set of “Cosmopolis” on May 29 after having closed out his “Twilight: Breaking Dawn” filming duties. 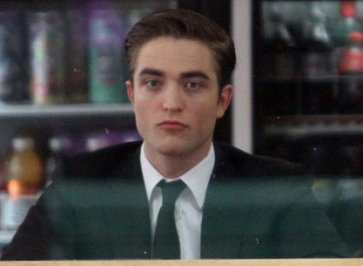 The British actor suited up and grabbed a seat alongside co-star Sarah Gadon while the pair delved into rehearsing a scene shot by the window of a cafe in Toronto, Canada. When the cameras began to roll, Robert proceeded to eat his breakfast before spitting the food up in laughter. His upcoming film is about a multimillionaire embarking on a 24-hour odyssey across Manhattan.