Star Magazine has made public the old picture of Robert Pattinson which was captured during his younger years when he worked as a model. 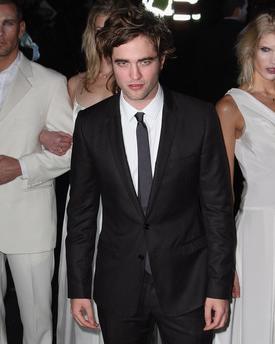 In the shot, the “Twilight” hunk is seen shirtless, wearing only retro-style Miu Miu swimwear paired with a pair of black socks and black-and-white shoes. His partner in the photo has been identified as British model Lucy Flower.

Per the publication, the snap was done as part of a photo shoot, taking place in London back in 2001, for the South China Morning Post newspaper’s weekend magazine. It is not known if Robert is aware that the particular snap has been made public.

Lucy herself has shared to Star Magazine her thought of the photo shoot session she had with Robert, recalling “Robert was such a shy, reserved little boy back then, I never would have thought he had that kind of superstardom ahead of him. Also, I don’t believe he was very comfortable with the outfit he had to wear and the fact that he was shirtless. So it’s not surprising that he was so quiet and seemed so nervous that day.”

Robert Pattinson himself has previously told British magazine Closer that before becoming an actor he used to be a model from the age of 12. Yet, he lost the job when he was 16 years old because he started to look too manly.

“When I first started I was quite tall and looked like a girl, so I got lots of jobs, because it was during that period where the androgynous look was cool,” said the British heartthrob. “Then, I guess, I became too much of a guy, so I never got any more jobs. I had the most unsuccessful modeling career.”