Zac Efron might have dropped out of the remake of the ’80s dance flick “Footloose,” in order to pursue “the unknown,” but the young star is definitely in the know about rumors that he’ll star in a fourth “Pirates of the Caribbean” movie, along with a sequel to “Hairspray.” 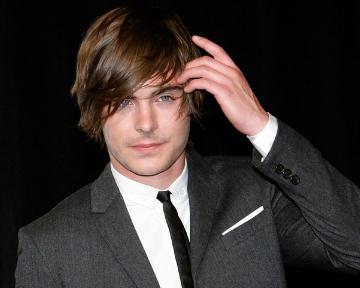 But, why does he think his onscreen kiss in “17 Again” has ruined his chance of landing a role in a Judd Apatow movie?

The young star was spotted Thursday in Las Vegas, where he received the ShoWest Breakthrough Performer of the Year award.

“‘Pirates of the Caribbean,’ there’s some rumored talk that (you’re involved). Is there any advancement?”

Zac replied: “I wish I could confirm it was anything but a rumor, but I haven’t heard it.”

On the possible fourth “Pirates of the Caribbean,” which Johnny Depp is reportedly in talks to star in, the “17 Again” actor responded: “I wish (it) would happen!. If you guys want to make it happen, I’m here!”

As for a sequel to “Hairspray,” Zac Efron said he’s game for that as well, saying: “At this point, they haven’t really talked to us yet, but I know that it’s an idea that they’re developing. And, it sounds like fun… it sounds like a good idea.”

One project that Efron might never get a chance to do is a Judd Apatow movie — and he blames his onscreen kiss in “17 Again” with actress Leslie Mann, who is Apatow’s wife.

When asked if he make out with Leslie Mann, Zac smilingly revealed: “I did!. She is so cool and so cute and awesome.”

“Judd was there that day too,” Efron explained. “It was just like, ‘Man I want to work with Judd too,’ it’s over now.”

When suggested to make out with him too and call it even, Zac laughingly added: “I tried, it didn’t work!”